The Beatification of Pope John Paul II On May 1

Latest Update: The Vatican has launched the Facebook page promoting his beatification of Pope John Paul II. The pontiff, who died in 2005, will move a step closer to sainthood with his May 1 beatification by Pope Benedict XVI — or recognition of John Paul II’s entrance into heaven and his ability to intercede for those who pray in his name.

Update: The Vatican will unveil the latest installment in its social media transformation next week – a Facebook page dedicated to the upcoming beatification of Pope John Paul II. The site, which will link to video highlights of John Paul’s 27-year papacy, is designed to promote the May 1 beatification.

END_OF_DOCUMENT_TOKEN_TO_BE_REPLACED

Palm Sunday marks the beginning of Holy Week, which concludes on Easter Sunday. On this day, Christians celebrate the triumphal entry of Jesus Christ into Jerusalem, the week before his death and resurrection.

The Bible reveals that when Jesus entered Jerusalem on top of a donkey, people cut branches from palm trees, laid them across Jesus’ path and waved them in the air. They greeted Him and shouted “Hosanna” meant “save now.” Immediately following this great time of celebration, He begins His journey to the cross.

What does the donkey symbolize? How about the palm?

END_OF_DOCUMENT_TOKEN_TO_BE_REPLACED

Ash Wednesday, in the Western Christian calendar, is the first day of Lent and occurs 46 days (40 days not counting Sundays) before Easter. Ash Wednesday derives its name from the practice of placing ashes on the foreheads of adherents as a sign of repentance. The ashes are made from the blessed palms used in the Palm Sunday celebration of the previous year. The ashes are christened with Holy Water and are scented by exposure to incense. This paste is marked in our foreheads to humble our hearts and reminds us that life passes away on Earth. We remember this when we are told

“Remember, Man is dust, and unto dust you shall return.” 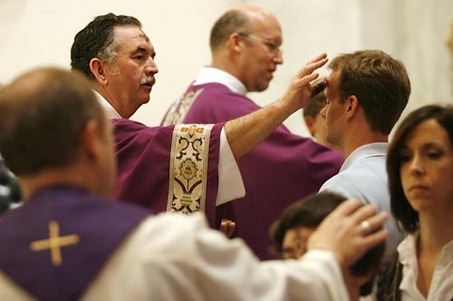 The religious regard this day as the start of the season of repentance, reflection, fasting and abstinence. People refrain from eating meat on this day and every Friday until Easter Sunday.

Did you go to church today? Did you fast and abstain from meat?