The past two days, in commemoration of the Passion and Death of Jesus Christ, I had stayed away from posting articles which are not Lent-related. My last two articles were devoted to religious themes to stay relevant to the occasion.

What if you can be funny and remain religious at the same time? Is that even possible? Consider our prayers answered. Community Christian Church presents a parody (yes, another one) of Rebecca Black’s “Friday”. Church member, Sadie B. sings “Sunday” featuring BP and Master E.

END_OF_DOCUMENT_TOKEN_TO_BE_REPLACED

Rebecca Black Congratulates Herself On A Billboard

We never had any idea up to what extent this 13-year old would go for self-promotion. Thanks to her loving mother… anything is possible.

As you already know by now, Rebecca Black’s mother paid $4,000 of her own money to Ark Music,a production company to write for her daughter music and lyrics, shoot the video, record and produce the track, add a rapper, and package it all together.

Two months after the video was uploaded in YouTube, the song has been viewed over 100 million times. And what would be a more appropriate congratulatory gift for Rebecca? Yap, her mom paid for a digital billboard located at the corner of LaBrea and San Vincente in Los Angeles and read “It’s Friday, Friday, Friday! 100 million+ views! Rebecca Black youtube.com”. 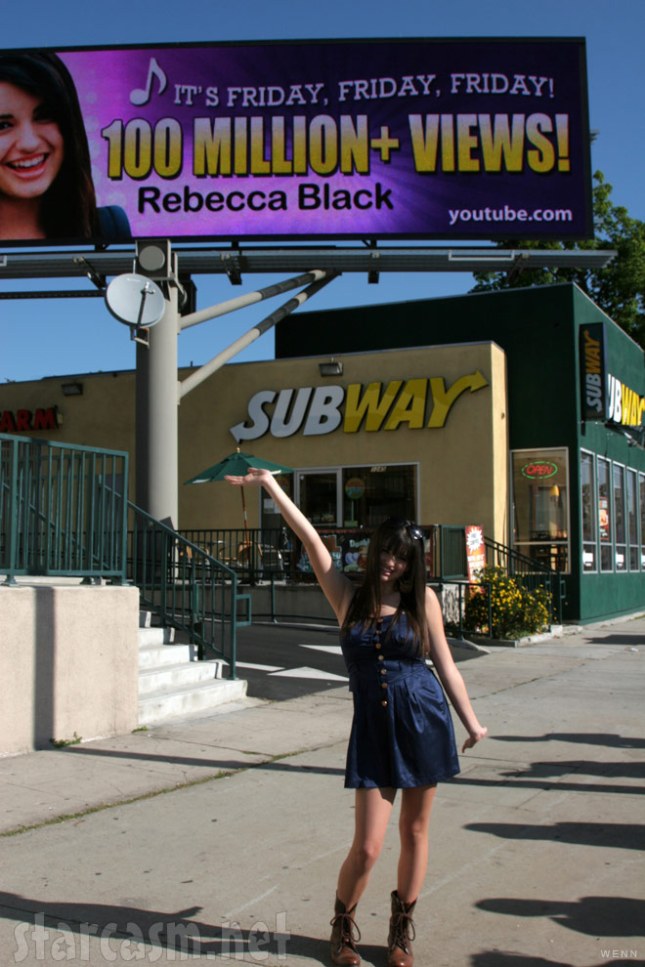 No, she's not promoting Subway but her billboard on top.

END_OF_DOCUMENT_TOKEN_TO_BE_REPLACED

I’m having so much fun with this song that I’m posting a follow-up article to Rebecca Black’s Friday is about JFK Assassination. 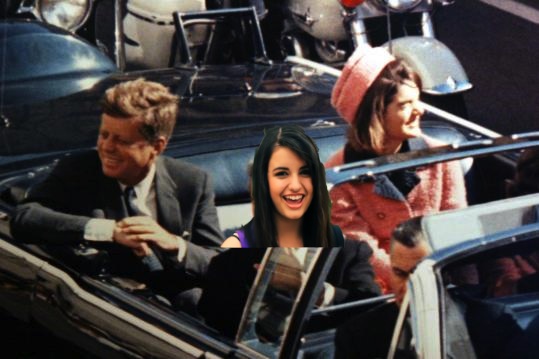 Bluestockings had rewritten the lyrics of the viral hit, ‘Friday’ based on JFK. Play the official video of Rebecca Black singing her hit song and try substituting the accompanying lyrics. Trust me, it’s hilarious. So let’s continue having fun, fun, fun!

END_OF_DOCUMENT_TOKEN_TO_BE_REPLACED

Rebecca Black’s “Friday” Is About The Kennedy Assassination

Oh, my! Touted to be the dumbest song of all time, Rebecca Black’s “Friday” is getting all the publicity it needs. While the “dumb” song had gained over 100 million YouTube hits and still growing, the people can’t stop talking about it. Comments reactions and responses to the song are flowing endlessly. Most are tirade campaigns and a few express their support to the 13-year old singer.

Today, I found this interesting article from thedailywhat.com. An anonymous reader just posted a shockingly hilarious interpretation of the hit song. Here’s a snapshot… 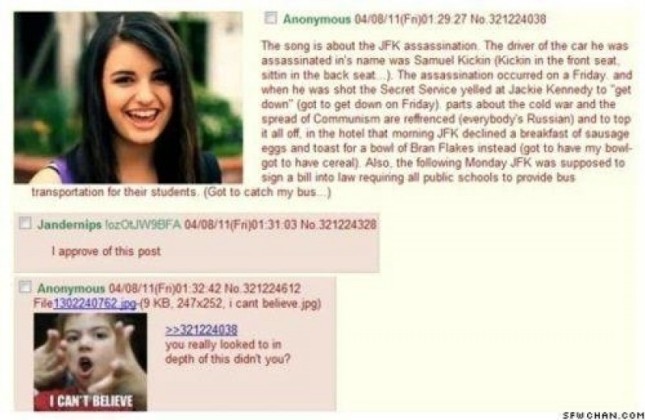 END_OF_DOCUMENT_TOKEN_TO_BE_REPLACED

Earlier this week, Stephen Colbert urged his friend, Jimmy Fallon to match a $26,000 donation made to DonorsChoose.org. Fallon urged his audience to raise that amount by Friday and if they succeed, he made Colbert to promise singing Rebecca Black’s YouTube sensation “Friday” on Late Night with Jimmy Fallon.

More than double the amount was donated and NBC Universal put in another 26 grand resulting to more than $80,000 in contributions to the sit, where educators solicit donations for school supplies and projects.

But the question is, did Colbert make good on his promise? He sure DID and the performance was EPICCCC!

Colbert was dressed to the nines in a tuxedo and started the first few lines of the song like a ballad which transitioned into a combination of hip-hop and rock. He was later joined by Fallon, former American Idol winner, Taylor Hicks and Knicks City Dancers. It was truly a “fun, fun, fun” performance.