It’s been a week since Charlie Sheen found himself jobless after CBS and Warner Bros. decided to shutdown the high-rating TV show “Two and a Half Men“. This came after Charlie went on an anger-fueled, rambling rant about his show and bosses on a radio station. Since then, Charlie had been on a never-ending TV and radio interviews, blurting bizarre and disturbing comments both live and on print via Twitter. The people who had been following all this debacle is now under the spell of the “Charlie Sheen” Drug. 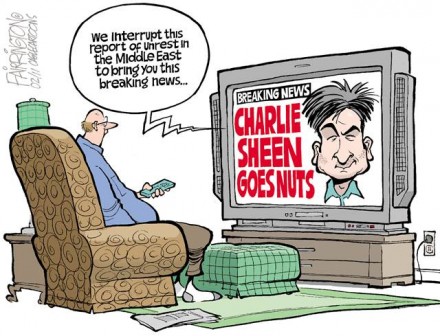 Yup, this is exactly what happened in the daily lives of the watching public. Instead of focusing in more relevant current events, everyone was glued to Charlie Sheen’s public appearances and Twitter messages.