The 53rd annual Grammy Awards, the biggest night in music, took place Sunday night. There were several awards that came as a surprise to a lot of people, including me. Two of them, I never heard of before. These includes Best New Artist, Esperanza Spalding and the Album of the Year winner, Arcade Fire.

There were several good performances which included two performances by Rihanna, one with Eminem and the other with Drake. Katy Perry‘s segment showed a never-seen-before clip of her wedding with actor-comedian Russel Brand. Bruno Mars earned a standing ovation for his performance which also showcased his talent in the drums. I personally liked Ceelo‘s performance with Gwyneth Paltrow and the puppets.

And for the show-stealers of the night, Christina Aguilera (again) and Lady Gaga (as usual). Christina, fresh from her Super Bowl fumble last Sunday had another mishap last night as she fell onstage after her segment for Aretha Franklin Tribute. Lady Gaga who’s remembered for wearing a meat dress last year, arrived in a GIANT EGG. Then, she performed her new single “Born This Way” with an extended bone on her shoulders. To cap off her night, she accepted her award with prosthetic horns and cheekbones. Can’t wait what she’ll do for next year’s Grammy. 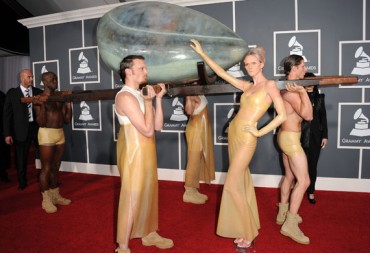 The news doesn’t end there. During CBS 2’s news recap of the Grammy Awards, reporter Serena Branson found herself not being able to speak coherently. She was rushed to the hospital after possibly suffering a stroke on air.